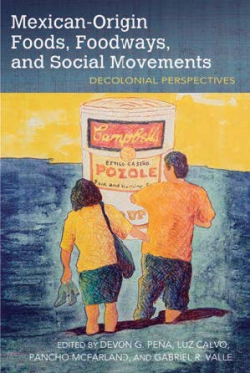 “We live in a time when a handful of global corporations and philanthrocapitalists are pushing for a nonsustainable, unjust, unhealthy, and undemocratic model of ‘One Agriculture, One Science.’ This paradigm is based on GMO monocultures and patent monopolies on seed and knowledge. This volume offers a diverse chorus of insightful voices from farmers, cooks, seed savers, plant breeders, organizers, farm workers, and scholar activists. Together they are creating alterNative worlds. Mexican-Origin Foods, Foodways, and Social Movements shows many of the vital pathways to decolonizing and postcaptalist futures offered by the unity of biological and cultural diversity in shaping food as a vital source of cultural and ecological resilience, social and economic justice, and democratic values.”
—Vandana Shiva

This collection of new essays offers groundbreaking perspectives on the ways that food and foodways serve as an element of decolonization in Mexican-origin communities. The writers here take us from multigenerational acequia farmers, who trace their ancestry to Indigenous families in place well before the Oñate Entrada of 1598, to tomorrow’s transborder travelers who will be negotiating entry into the United States. Throughout, we witness the shifting mosaic of Mexican-origin foods and foodways in the fields, gardens, and kitchen tables from Chiapas to Alaska. Global food systems are also considered from a critical agroecological perspective, including the ways colonialism affects native biocultural diversity, ecosystem resilience, and equality across species, human groups, and generations. Mexican-Origin Foods, Foodways, and Social Movements is a major contribution to the understanding of the ways that Mexican-origin peoples have resisted and transformed food systems. It will animate scholarship on global food studies for years to come.

Available through the University of Arkansas Press: http://www.uapress.com/dd-product/mexican-origin-foods-foodways-and-social-movements/

All royalties and honoraria from this book and tour will go toward the co-editors' select non-profit organizations including the construction of a home for the first campus of the emerging Universidad del Maiz, a network of more than fifty indigenous corn growers and protectors to be hosted by the Acequia Institute.