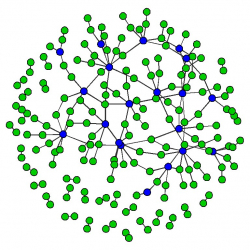 Blue dots represent households with essential workers like medical staff or grocery workers who need to maintain some face-to-face connections. Green represent other households in which one person continues to meet up in close contact with one friend.

Goodreau has been in the news twice in recent months, both times related to COVID-19. The first case stemmed from his winter quarter course, Plagues and Peoples, profiled in a previous AnthropoLog. This year’s course coincided with the emergence of the COVID-19 outbreak, first in Wuhan, and then around the world. As the weeks went by, the many topics covered in the course started appearing on the nightly news and in everyone’s social media feeds — from the biology of viruses and the human immune system, to the use of models to understand and predict spread and the impact of behavioral changes, to the ways in which different people and societies understand risk and blame and fear, and how our decisions are all intertwined. You can read more about the journey that Professor Goodreau and his students went on together in the April issue of the College of Arts and Sciences’ Perspectives newsletter.

More recently, Professor Goodreau, along with Biological Anthropology PhD student Emily Pollock and colleagues around campus, developed a visual aid for helping the public understand the importance of staying the course with social distancing. The website, called Can’t I please just visit one friend? was inspired by a conversation he had early in the lockdown with a friend whose son wanted to know if he could still hang out with his girlfriend. From his years in HIV prevention, Professor Goodreau understood one key principle that applies here as well: that people tend to focus on the idea of “superspreaders” or others with lots of contacts as the cause of the problem, then see themselves as different from them and imagine that their small number doesn’t matter much. But in fact, many people having just a few connections can create all of the network connectivity needed for widespread transmission. The research team retooled some of their existing health communication materials — replacing people with households, for instance, and rewriting all of the language to reflect the current situation. Their aim was to provide a highly visual and intuitive approach that would appeal to a wide audience, especially youth, while also having options for those who want to delve deeper into the math. The website spread on social media and via a UW news story, eventually appearing on numerous outlets locally, nationally, and internationally, including the New York Times. Along the way the story was republished in at least five other languages. Professor Goodreau reports that he has also received a host of emails from people thanking him for helping them to explain to their family members why it is crucial for them to ramp up their social distancing. He says he is happy he was able to help out in this small way, but like everyone else, is looking forward to the day — sometime well in the future — when we can all return to our regular lives on campus and in our communities.