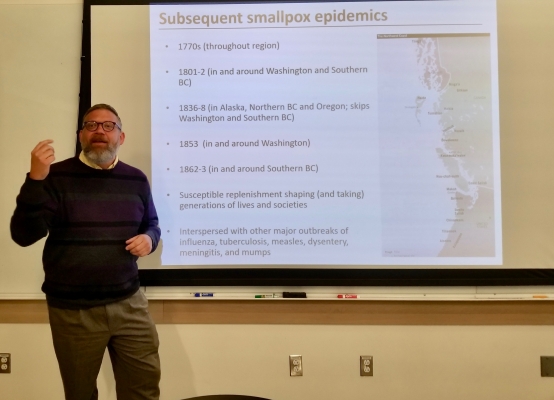 SARS. Swine flu. Ebola. Zika virus. Every few years seems to bring yet another scary outbreak to the world’s attention. Countless lives are cut short, communities struggle to cope, governments and public health agencies spring into action, and the cycle repeats. Yet as awful as these epidemics are, they pale in comparison to those that have plagued our species through history — smallpox, the Bubonic Plague, the 1918 flu, and most recently HIV/AIDS, all killed millions within a few years in different times and places. Why are some infectious diseases so explosive and others seemingly so slow and stable? Why do epidemics sometimes die out as fast as they appeared and others stick around? And how has all of this shaped our evolution, history, culture, politics, economics, art? These are the questions that the Department of Anthropology course, Plagues and Peoples (BIOA 206), addresses.

Taught by Professor Steven Goodreau, the course takes a group of 150 undergraduates on a journey through three ways of understanding an epidemic. The course begins with an overview of the human immune system and the basic biology of the pathogens that challenge that system, highlighting the evolutionary arms race that ensues. This knowledge then allows students to delve into the basic mathematics of different types of epidemics (how the features of pathogens, and the behaviors humans engage in both to foster and inhibit their spread) and shape the way transmission will cascade through a population. Armed with this understanding, students then move into an exploration of the cultural history of epidemics, from the archaeological record through to the present, and the myriad ways that they have shaped human evolution, history and society.

“Students are often surprised to learn just how ubiquitous the marks of epidemics are,” says Goodreau. “Many have a sense of how smallpox decimated Native American communities — but rarely do they know the extent of that, or its relationship to specific moments in the history of colonization here in Seattle and Washington State.” One of the few things that all the epidemics they study have in common, he adds, is how the blame and fear they foster provides justification for actions that would otherwise be considered inexcusable. For instance, a bubonic plague pandemic just over a hundred years ago hit both San Francisco — leading to the US’s Chinese Exclusion Act — and South Africa — leading to the policies that later evolved into apartheid.

Something he realized a few years back is that the epic history of the early AIDS crisis, which older Americans may take for granted, is less familiar to students with each passing year. Goodreau brings in a friend named Tom who lived through those years to talk about it: “Hearing Tom’s story — attending over 100 funerals in a year when he was just a little older than they are now — and seeing pictures of his lost friends is profoundly moving, and makes everything else we talk about in the class more real.”

Goodreau’s favorite thing about teaching the class, he says, is how it brings together so many different disciplines. “Seeing students realize that all these different fields they study — biology, math, history, literature, all the subfields of anthropology — actually come together in trying to understand a real-world phenomenon like an epidemic: I think that is a crucial moment in everyone’s education. I love being able to help make that happen.”