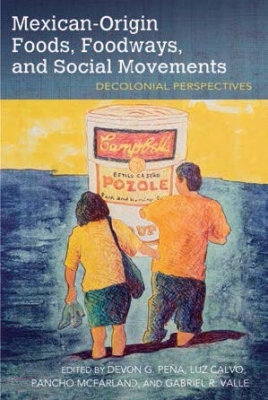 The Association for the Study of Food and Society awarded the "Best Edited Volume - 2018" Prize to a book co-edited by UW Professor Devon G. Peña (AES, Anthropology). Mexican-Origin Foods, Foodways, and Social Movements: Decolonial Perspectives was published in September 2017 by the University of Arkansas Press as part of the award-winning series "Food and Foodways Series" edited by Jennfiar Wallach and Michael Wise. The 466+ page volume was suppoorted by a grant from the Julia Child Foundation and was co-edited by Professor Peña with Luz Calvo (Cal State-East Bay), Pancho McFarland (Chicago State), and Gabriel R. Valle (CSU-San Marcos, UW Ph.D. 2015).

In announcing the award, the ASFS explained the judges considered how the book "...filled in a gap...is incredibly timely and necessary given our political and social landscape....[and] was multidisciplinary and allowed many voices to be heard..."

In her review, Vandana Shiva, a Goldman Prize recipient and leading global environmental and food justice scholar and advocate, writes:

We live in a time when a handful of global corporations and philanthrocapitalists are pushing for a nonsustainable, unjust, unhealthy, and undemocratic model of ‘One Agriculture, One Science.’ This paradigm is based on GMO monocultures and patent monopolies on seed and knowledge. This volume offers a diverse chorus of insightful voices from farmers, cooks, seed savers, plant breeders, organizers, farm workers, and scholar activists. Together they are creating alterNative worlds. Mexican-Origin Foods, Foodways, and Social Movements shows many of the vital pathways to decolonizing and postcaptalist futures offered by the unity of biological and cultural diversity in shaping food as a vital source of cultural and ecological resilience, social and economic justice, and democratic values.