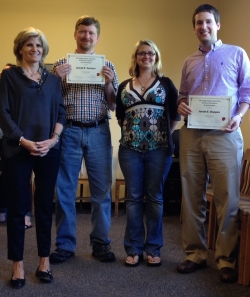 David Carlson and Jake Deppen both received the 2014 Yeager Award for Scholarly Excellence for their publications, supported by the Yeager Endowment Fund. Amy Jordan was coauthor on the paper with David.

Will Brown received an NSF Dissertation Improvement Grant for his project, “Detecting Epidemiologic Transitions in Pre-Contact Kodiak.” The work involves joining statistical paleodemographic modeling and recording the prevalence of parasites in archaeological middens to better understand the population history of Kodiak Island, Alaska over the past 6,000 years.

Darren Byler’s work was featured in a Time Magazine article (10/24/14) about being a Uighur pop star in China’s Xinjiang region.

David Carlson and Jake Deppen both received the 2014 Yeager Award for Scholarly Excellence for their publications, supported by the Yeager Endowment Fund. Amy Jordan was coauthor on the paper with David.

Jennifer Carroll was awarded a prize for best graduate paper from the Science, Technology and Medicine interest group of the Society for Medical Anthropology at the annual meeting of the American Anthropological Association. Jennifer also received a postdoctoral fellowship, beginning this summer, as part of an NIH training grant on “HIV and Other Infectious Consequences of Substance Abuse” (PI: Timothy P. Flanigan, MD) at The Miriam Hospital, a teaching affiliate of Alpert Medical School, Brown University.

Rodrigo Solinis Casparius and Anna Cohen participated in an archaeology expedition in Honduras that was featured in a National Geographic article.

Christopher Chan received an Honorable Mention for the NSF Graduate Research Fellowships Program for his proposal titled, “Search Engine Labor: An Ethnography of Code and Content.”

Stephanie Cruz has been awarded a mentoring grant from the William T. Grant Foundation. The grant will provide two years of support for her to work with Donald Chi, faculty member in the School of Dentistry, on research relating to dental health policy and Medicaid.

Joshua Griffin has been chosen as one of ten graduate students (and the only anthropologist) to serve as HASTAC Scholar for the 2014-15 academic year, based on their advancement of digital scholarship at the UW. HASTAC (Humanities, Arts, Science, and Technology Alliance and Collaboratory) is a network of individuals and institutions inspired by the possibilities that new technologies offer for shaping how people learn, teach, communicate, and organize local and global communities. Griff also co-authored an article entitled, “Interior Secretary Has ‘Much to Learn’ from Kivalina’s Iñupiaq Elders on Climate Change and Village Relocation” in The Huffington Post (2/23/14).

Jenn Huff has been awarded the 2014-15 Niles Fellowship to help her finish her dissertation entitled “Settling Down? Understanding changes in mobility and sedentism in the archaeological record of highland Papua New Guinea.”

Joyce LeCompte-Mastenbrook received the 2014 Burke Archaeological Collections Research Fellowship for her project “Historical Ecologies of swǝǝtíxwtǝǝd in the Puget Sound Region of Coast Salish Territory.” This fellowship is made possible by donations to the Archaeology Endowment Fund and the Julie Stein Endowment Fellowship, and covers three months of summer stipend plus research expenses for student projects that utilize Burke archaeological collections.

Rachel Lee received two Foreign Language and Area Studies (FLAS) fellowships for the study of Chinese language and for research involving Chinese language, for Summer 2015 and academic year 2015-16. These will support her preparation and research on the educational strategies of Chinese students attending NYU-Shanghai. Rachel also received the Graduate School Chester Fritz Fellowship for pilot research in the summer of 2016, as well as the China Studies Program Fellowship for pilot research next year.

Leah Isquith is the recipient of two fellowships: The Go Health Fellowship, to study food insecurity in Peru this summer, and the Foreign Language and Area Studies (FLAS) Fellowship to study Portuguese next year.

Lily Shapiro won a Society for Medical Anthropology travel grant to support her participation in the American Anthropological Association conference.

Bonnie Tilland has accepted a tenure-track position (Anthropology and Asian Studies) in the East Asia International College at Yonsei University in South Korea. She will also be at the University of Hawai‘i in January 2016 as a POSCO visiting fellow (Pohang Steel Company, which supports and promotes Korean Studies).

Liying Wang was awarded a Graduate School Chester Fritz Fellowship to support her dissertation research on the archaeology of early European contact in Taiwan.

Lauryl Zenobi was awarded an academic year Foreign Language and Area Studies (FLAS) fellowship, her second such fellowship, to continue her studies in advanced Indonesian and Southeast Asian archaeology.

Lena Easton-Calabria was awarded a Fritz Scholarship and also received a Mary Gates Scholarship for her project in Peru on medicinal plants, health/healing, and the position of the shaman. Lena was also chosen to present at the National Conference for Undergraduate Research in Spokane. Her presentation, based on several months of field research, is entitled, “Ayahuasca Use and the Positionality of the Shaman in the Peruvian Amazon Rainforest.”

Varsha Govindaraju, a graduating senior double majoring in Anthropology and Law, Societies and Justice, was one of 18 students nationally selected as a 2015-16 Luce Scholar. The intent of the Luce Scholarship is to provide an immersion experience in Asia for an outstanding group of young Americans who would not otherwise have the opportunity to come to know Asia intimately. To be successful, candidates must demonstrate an outstanding capacity for leadership, have a record of high achievement, and have mature and clearly defined career interests with evidence of potential for professional accomplishments.

Danny Shelton was selected to the Pac-12’s all-academic first team.He is the first UW player in 23 years to have this honor.

Laurie Tran was chosen to present at the National Conference for Undergraduate Research in Spokane. Her presentation, “Acculturation and Community of (Vietnamese) Asian-Americans,” is based on local fieldwork and her own life experiences. Laurie was also awarded a Bill Emerson Congressional Hunger Fellowship, which will give her a year’s support as a community organizer to work on anti-hunger programs in Washington D.C. and elsewhere around the country.

Three undergraduate students, Shannon Bereiter, Julie Do, andEmily Muirhead, had their work published in the Medical Anthropology Student Association weblog, a project managed by the Society for Medical Anthropology. Each of these students submitted essays on the topic of the social construction of the female body. Their work was subject to an anonymous review process, and these essays went through several rounds of revision before being selected for this blog series.

Fan Ke (PhD, 2001), Professor and Head of the Anthropology Department at Nanjing University, has just established a book series including ethnographic works from him and his PhD students. It is called the Purple and Gold Mountain Anthropology Series, in honor of Purple and Gold Mountain in Nanjing, where the University’s campus is located, and of his UW graduate education.

Lisbeth Louderback (PhD, 2014) is now happily installed in her new position at the Natural History Museum of Utah and the Department of Anthropology, both at the University of Utah in Salt Lake City.

Siobhán Mattison (PhD, 2010) has accepted a position as assistant professor of evolutionary anthropology at the University of New Mexico.

Stephen Paul Miller (BA, 2012; MSW, 2014) was featured in a UW article about the “Forefront” suicide prevention program that he has helped pioneer.