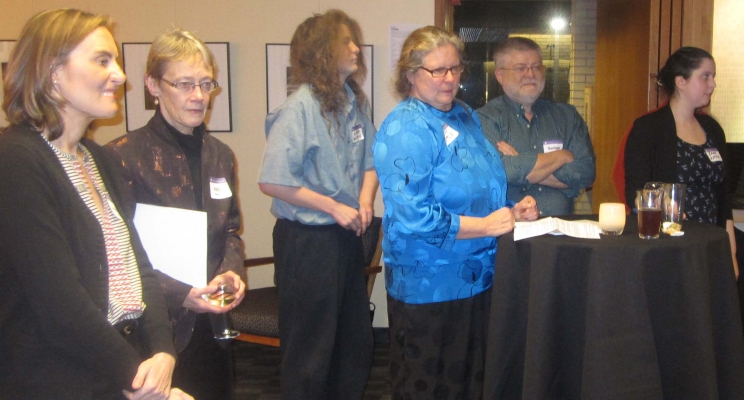 Cathy Tuttle and others at STARTS event
View gallery

In January, the department hosted an event that focused on our graduate student pilot research endowment—STARTS (Student Training in Anthropological Research Tools and Skills)—andhonored its founders, Cathy Tuttle and her late husband David Notkin. In the early 90s, Cathy had been a graduate student in the Department of Anthropology. David was a member and former chair in the UW’s Department of Computer Science and Engineering. He passed away in April 2012, and the event was an occasion not only to thank Cathy and David, but also to honor David, his passion for supporting students, and his belief in education as the foundation for a better world.

In establishing this important endowment, Cathy and David made a truly remarkable personal investment in the emerging scholars of the Department of Anthropology and the work that they will do. For the students whose pilot research is supported by this fund, this gift demonstrates the department’s confidence in their future and their ability to secure more substantial funds for their dissertation research. The STARTS fund was founded in 2007 and, over the years, has grown with donations from faculty, staff, friends, and students. Today it has supported pilot research for 31 graduate students in anthropology.

At the event, attended by many of Cathy and David’s colleagues and friends, Cathy shared her passions, wisdom, visions and generosity with us about her and David’s belief in the value of travel and education. She explained that she and David decided on the acronym STARTS because of images they had of little green plant starts that, with nourishment and support, would later grow into strong and impressive plants. (Link to Cathy’s speech.)

To honor David and Cathy, as well as to share the work of these talented students, the department put together a 45-page booklet that highlights 21 of the STARTS recipients with descriptions and photos about their research. This was presented to Cathy (and is also accessible online). The students’ research projects cover a wide spectrum and include the following: the history, ethnoecology, and cultural politics of natural resource management in the Pacific Northwest; questions of identities and allegiances of Malay Muslims in a volatile region of southern Thailand; Mesoamerican political organization; local responses to colonialism at early Dutch nutmeg plantations in Indonesia; ways in which the environment shapes and influences human hormones and behavior; subsistence behavior of the Tsimane in the Bolivian Amazon; and ways in which patients, doctors, and administrators deal with the “invisibility” of traumatic brain injury and how they conceptualize war-related disabilities when warfare is increasingly technologized.