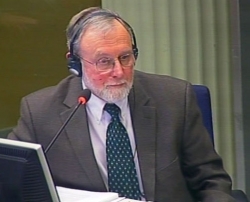 The Department of Anthropology mourns the passing of two members of our community: Dr. William Haglund and Dr. Katherine Taylor. As biological anthropologists with a focus on forensic anthropology, both devoted their lives to giving a voice to the voiceless, providing (some) answers to families, and ensuring that the perpetrators of great violence were held accountable for their crimes.

After working for the King County Medical Examiner’s Office and earning a PhD in then-physical (and now-biological) anthropology from UW under the supervision of Dr. Daris Swindler, Dr. Haglund spent his professional life recovering and identifying human remains. As a Chief Investigator with the ME’s office, he investigated the Wah Mee massacre site and Green River serial killings. While consulting for and later leading the International Forensics Program and as a Senior Investigator for the UN International Criminal Tribunal (ICT), he mobilized teams of forensic scientists to recover evidence of war crimes from sites in Bosnia and to search for the disappeared in Honduras. He testified at the UN ICT trials that convicted Radovan Karadzic and Ratko Mladic of crimes against humanity and genocide. An expert in forensic taphonomy with textbooks on the subject, he investigated sites from Cyprus to Nigeria to Afghanistan to East Timor, always with a focus on seeking justice for those whose lives were lost to armed conflict, war, terror, genocide and other traumas. He was a Fellow of the American Academy of Forensic Sciences and was awarded the group’s T. Dale Stewart award in 2013 in recognition of his lifetime achievements in taphonomy and human rights work.

After assuming her role as a forensic anthropologist at the King County Medical Examiner’s office in 1996, Dr. Taylor became the Forensic Anthropologist for King County and Washington State in 2006. She was affectionately referred to, was an Affiliate Assistant Professor in our department, advised and mentored students, and provided expert consultation to the department and the Burke Museum. An authority in skeletal morphology, she was instrumental in identifying the remains of many murder victims, including the skeleton of the youngest Green River Killer victim, 14-year-old Wendy Stephens. Her passion for her work can be summed up by her reaction to establishing the identity of Stephens: “The only thing you own your entire life is your name. It’s bad enough that he [the killer] was taking these girls’ lives, but to steal their name, too. Everybody needs their name when they die, everybody deserves to be remembered” (Mercer Island Reporter, August 10, 2021). Dr. Taylor did not like to speak of “closure” after identification, because she had learned from families that the pain of losing a loved one does not close, but rather shifts into a different phase of loss. This compassion and her tenacity were instrumental in her work. 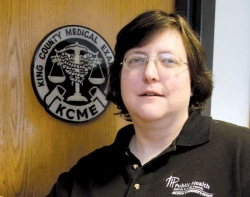 Although Dr. Taylor’s work was more local than that of Dr. Haglund’s in the later decades of his career, both were motivated and sustained through the emotionally difficult work of human remains identification by a mission to help families and communities move forward and to restore the dignity that a name provides to the deceased. Thank you for your service, Bill and Kathy. Rest in peace.