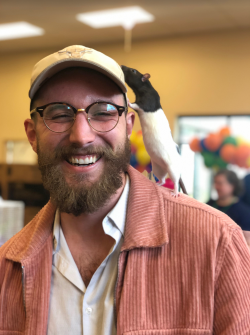 Kyle Trembley, a third year PhD student in sociocultural anthropology was recently awarded a very prestigious and competitive American Institute of Indian Studies (AIIS) fellowship for his dissertation entitled, "Rattus Hierarchicus: Rats, Caste, Masculinities, and Care in Rajasthan." Kyle will head out to conduct fieldwork in 2020.

What brought you to anthropology?

When I entered college at the University of Illinois in Urbana-Champaign as a first-generation student, I had absolutely no clue what I was doing. I remember when I told my undergraduate advisor of my broad interests surrounding politics, society, and religion in the US and South Asia, he insisted “you should major in anthropology!” That semester, I enrolled in my first anthropology course. However, my advisor failed to inform me that anthropology is a diverse field that includes biological, linguistic, sociocultural, medical anthropology and archaeology. I ended up taking a biological anthropology course on human evolution, and, while interesting, it failed to inspire me to pursue further coursework in anthropology. Instead, I found my broader interests engaged with more deeply in religious studies, which then became my undergrad major. This led me to pursuing an MA at the University of Chicago Divinity School. It was there that I took my first sociocultural anthropology course, the "Anthropology of Religion.” I was instantly captivated by the method of participant observation or “deep hanging out” and the ways I saw anthropologists raise broader theoretical questions from situated experiences and speak to contemporary politics and social issues. From that moment, I decided to pursue further training in anthropology, which ultimately led me to the PhD program in sociocultural anthropology at UW.

How would you describe your field of study/research to a friend who is not in your graduate program?

I would tell them I work in the area of multispecies ethnography, which seeks to understand how nonhumans, such as animals and plants, are entangled within human social, political, and economic systems. Particularly, I study how material relationships between humans and rats in both India and the US intersect with processes of social differentiation along the lines of race, caste, and gender.

What drew you to your topic?

Actually, when I was young, I always wanted to be a zoologist and study nonhuman animals. As I grew older, I became more interested in human politics and religion. While at the University of Chicago though, I first came across and became deeply influenced by literature in anthropology, queer studies, and critical race studies that raised questions surrounding the category of the “human” and the complex relationships between humans and nonhumans. After completing my MA, I spent a year in Jaipur, India as part of a Hindi-language program. During that time, I first travelled to the Karni Mata Temple in Deshnoke, India, which is a popular pilgrimage and tourist site that many often sensationally refer to as “the rat temple.” Seeing the ways that people and rats related there and the various practices of care enacted for the rats instantly made me begin questioning the diverse range of relationships with rats across various social spaces: in Deshnoke, as ancestors and kin but also in the broader laboratory use of rats, rats as pets, and, most of all, rats as pests that must be exterminated.

What’s been your experience so far?

I’ve been privileged to receive a Pilot Research Grant from the University of Washington Department of Anthropology and a Boeing International Fellowship to conduct preliminary fieldwork at the Karni Mata Temple during the summers of 2018 and 2019. Due to these periods of pilot research, I have been able to deepen my relationships with many interlocutors in Deshnoke and raise questions surrounding the complexities of relations between humans and rats there. I have also done small ethnographic projects in Seattle with exterminators, owners, and breeders of rats. Having extraordinary guidance from faculty advisors, particularly Radhika Govindrajan and Maria Elena Garcia, has been beyond instrumental in the development of my project and my thought.

What do you enjoy most about Seattle?

I enjoy having escaped from the frigid Chicago winters that I grew up in. Most of all, I love the greenery and the views of the sound and the mountains.

I’m currently in the process of preparing for my general exams, writing other grant applications for fieldwork, and preparing my research competency paper to officially become a PhD candidate. I will be returning to Deshnoke in late-August of 2020 to begin my extended fieldwork at the Karni Mata Temple.

What advice would you give to your past self about graduate school?

The quarter system moves extremely fast but try your best to move at your own pace. Go slow. Read broadly and widely. Stay creative and experiment with thought. Build community and get involved both within and outside of academic spaces. Don’t be so hard on yourself and do whatever you need to do in order to enact self-care.