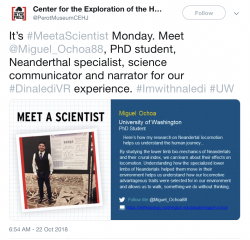 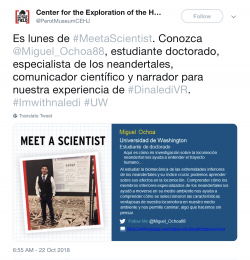 Miguel Ochoa, who has a bachelor’s from UW Bothell, worked with the Perot Museum of Natural History in Dallas last year to translate their brand-new Homo naledi (South African hominin fossil) exhibit into Spanish. Miguel is currently a PhD student in anthropology at the UW Seattle. He is an NSF Graduate Research Fellow and is studying Neandertal locomotion with Professor Patricia Ann Kramer.

There is a critical gap in evolutionary science outreach and literacy, and the concept of human evolution can be daunting. One of the many barriers is language, with many non-English speaking populations lacking access to primarily English written scientific resources. Even in predominantly English-speaking countries, a large amount of people are still excluded. Our evolutionary past is amazing.  It’s human history and people deserve to be able to interact with human history in ways that are comprehensible to them. A foundation in evolutionary theory will also help understand broader topics such as biodiversity, animal extinctions, the implications of climate change, and the impact we have on such things.

I was fortunate enough to work with the Perot Museum of Nature and Science in Dallas, Texas to make their new Virtual Reality Dinaledi Experience exhibit more accessible for the Spanish speaking community. This amazing project used a complete scan of the Dinaledi chamber where Homo naledi was discovered to allow people to experience the cave system and “discover” fossils just the way the excavators did. I was one of six scientists who narrated and described the cave in our native language, making it accessible for non-English speakers to see the cave and uncover some of the amazing things found there via a mobile application. This kind of accessibility gives people who otherwise might not understand how this discovery was made the ability to see what the scientists saw and hear the story in their native tongue.

Outreach programs aimed at making evolutionary science and understanding of human origins more readily available for people who might not otherwise have access to it because of a language barrier are very important to me. Coming from a Mexican immigrant family and being first generation here, I know firsthand the limitations that a language barrier can place on exposure and understanding of new information. I grew up bilingual and needing to translate for my parents and others, so being allowed to translate an entire exhibit to make it more accessible to people like my own parents, and having watched them use the virtual reality app and get a glimpse of what happens in my field and be able to understand it has been an immense privilege for me. That is something that I want to extend to others as well.

In the future, I would like to work on more outreach projects to make human evolution and evolutionary theory in general more accessible for Spanish speakers. I would like to create a podcast or web series where current events in anthropology and introductory lessons in anthropology and human evolution are translated into Spanish (and hopefully more languages) for a lay audience. I want to give children and adults the chance to learn the basics in an interacting environment and use their questions to guide their learning. I hope that will help show that human evolution is human history and it is not limited to one language. We should all be able to engage and learn from it regardless of what language we speak. 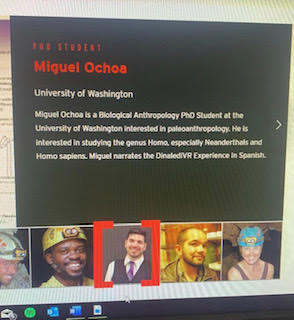