The Age of the Kampuchea Picture 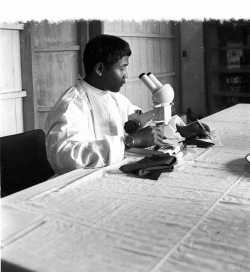 In 2017, award-winning diasporic Cambodian filmmaker Rithy Panh came to the University of Washington as a Walker-Ames Scholar. As someone who has long admired his work, I wanted to make something for him, an offering of sorts, in honor of his visit. Panh is known for his innovative practice that includes improvisation and animation in addition to more traditional techniques of documentary and narrative cinema. His films deal with memory; genocide and its effects; French colonialism; and precarious life in postconflict Cambodia. Panh is also an archivist and educator. He co-founded the Bophana Center, which is dedicated to repatriating and preserving film, photography, and audio materials related to Cambodian history.

The University of Washington and Bophana Center share a unique collection of materials: the Elizabeth Becker Archive. The archive, housed at UW Libraries and at Panh’s Bophana Center, contains materials from Becker’s two-week reporting trip to Democratic Kampuchea in 1978, just days before the Vietnamese invasion that ousted the Khmer Rouge. Becker was one of only two journalists from mainstream western media to visit Democratic Kampuchea; her notes, audio recording of interviews with senior leaders, and communiques from the regime are unusual primary sources from the period. Why not explore these troubling materials housed in our respective institutions, and the provocations they may raise for a broader public? With these questions in mind, filmmaker Adrian Alarilla, historian Judith Henchy, and I created The Age of the Kampuchea Picture, an interactive installation using text, images, and sound from the Becker Archive.

The creative work of Alarilla, then a Master of Arts student at UW in Southeast Asia Studies, The Age of the Kampuchea Picture explores the relationship between images, state violence, and the ethics of documentary representation. It is comprised of a video projection, a makeshift screen, and an audio recording. The projection is an edited selection of roughly half the black and white images in Becker’s archive. The screen is made of photocopies of documents from the archive, arranged to form a rough map of Kampuchea. There are blacked-out spaces on the map representing locations of the killing fields, based on a map created by the Documentation Center of Cambodia.

Becker’s photographs are hauntingly serene; many were clearly staged by her hosts in an attempt to counter refugee narratives about human rights abuses inside the country. The images depict people working in factories and rice fields; views of the countryside from a moving car; meals and conversations between the journalists and their hosts; the temples at Angkor Wat, even. These pictures show an industrious self-sufficient nation with deep cultural history.

Belying the rationality of the Khmer Rouge plan for intensive modernization of the country is its extreme violence, intentionally hidden from the view that Becker was allowed to witness and photograph. This violence is embodied in its very absence; as Becker has noted in her writings about the 1978 trip, pictures of reality are strikingly missing. Our challenge in creating an exhibit from these materials was to open up the Becker Archive while acknowledging that the images and propaganda texts are projections of Democratic Kampuchea’s exhibitionary order.

The Age of the Kampuchea Picture speaks to the question of what is allowed to be seen, what is hidden, and ways of seeking historical truth in the absence of seeing. In our work with Becker’s materials, the projection is interrupted: the screen is not blank or flat, but is a multilayered representation of an outline of Kampuchea made of documents, many of which contradict the seeming normalcy of the photographic images. There are dark holes in the screen where the senselessness of genocide overcomes the images of Kampuchea that the Khmer Rouge leaders attempted to project. Part of the images are distorted as they conform to the bodies of passersby moving between the projector and the screen. We, too, in the United States, are implicated. We are part of the picture.

The Age of the Kampuchea Picture screened at UW Allen Library from December 2017-January 2018, and at “ART of Survival”, an arts event at Seattle City Hall organized by the Cambodian American Community Council of Washington in 2018. The project also received Honorable Mention from the Center for Research Libraries Primary Source Award in Research. The Age of the Kampuchea Picture has been invited to screen at the Bophana Center in 2019 and the Rhode Island School of Design in 2020.