In Press: Sex & Death on the Western Emigrant Trail: A Biology of Three American Tragedies 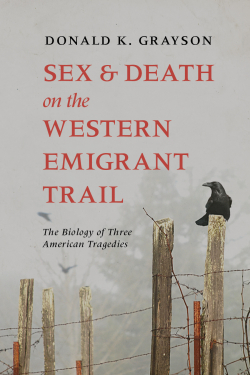 Sex and Death on the Western Emigrant Trail: The Biology of Three American Tragedies, by Donald K. Grayson

"During the winter of 1846–1847, members of the Donner Party found themselves stuck in the snows of the Sierra Nevada on their journey to California, losing many in their group to severe cold and starvation. Those who survived did so by cannibalizing their dead comrades. Today the Donner Party may be the most famous of American overland emigrant groups, but it was not the only one to face extreme conditions. Ten years after the Donner Party, two groups sponsored by the Mormon Church, the Willie and Martin handcart companies ran into similar difficulties. Unlike the Donner Party, however, these people were following a well-traveled path, but they were doing it in a novel way—pushing and pulling their goods and children in handcarts some 1,300 miles from Iowa to Utah. Caught in early winter storms in Wyoming, 200 members of these two companies died along the trail.

The plights of these emigrant groups have been addressed by different historians in different ways; this book is the first to examine the tragedies in terms of biology. Grayson shows that who lived or died can largely be explained by age, sex, and family ties. His investigation reveals what happens when our cultural mechanisms for dealing with famine and extreme cold are reduced to only what our bodies can provide within structured social contexts. His results are surprising and not always intuitive as he investigates who survived in these life threatening situations."

DONALD K. GRAYSON is a professor in the Department of Anthropology and a member of the Quaternary Research Center, both at the University of Washington. He is a recipient of the Nevada Medal for scientific achievement and a member of the National Academy of Sciences and the American Academy of Arts and Sciences.

The press webpage for the book is: https://uofupress.lib.utah.edu/sex-and-death-on-the-western-emigrant-trail/

How did you develop an interest in archaeology?
When I was a kid, maybe ten years old, I saw two movies on TV that had a significant impact on me. The first wasThe Snake Pit, about a woman’s struggles with schizophrenia. That film made me deeply interested in the causes and potential cures of mental illness. The other was a silly movie about an archaeologist with a beautiful blond daughter working in Egypt.I was too young to care about the blond daughter but the film made me think that being an archaeologist would be really interesting. As a result, I went to undergraduate school intending to become a psychiatrist while minoring in anthropology. When I was a junior, a class I took in “Abnormal Psychology” taught me that psychiatry was not an effective way to help the mentally ill, so I switched my major from psychology to anthropology with a focus on archaeology. I then went to the University of Oregon for my Ph.D. in anthropology. I have never regretted the decision.

What factors influenced your decision to make this your career?
It was that dumb movie that got me going, but one of the remarkable things about archaeology is how all-encompassing it is. It was clear from early in my career that archaeology would allow me to combine my interest in human interactions with their environments with my interest in mammals while providing me with just what I needed to have in order to pursue those interests. I'll talk about this more later.

What do you find to be the most challenging aspect(s) of your work?
Um, grading exams?

How did you choose to focus your work in the Great Basin? On prehistoric animal species?
Prehistoric animals first: When I was a kid (here we go again), I saved my money to buy the Golden Nature Guide to Mammals (“218 Animals in Full Color”), a prized possession that I still have. That book got me deeply interested in mammals and I carried it with me wherever I went to help me identify the animals I saw. When I was in graduate school, I read Pleistocene Extinctions, edited by Paul Martin and Herb Wright, which got me hooked on the extinct mammals of the Ice Age. The combination of the two led me to study with vertebrate paleontologists so I could identify and analyze the bones of ancient animals from archaeological and paleontological sites to help us better understand the past and how the world came to be the way it is today.Doing that has been a main thread of my career.

And now the Great Basin: My attachment to this region came about almost by accident.I had spent my undergraduate years doing archaeology in upstate New York and was still interested in that area when I started graduate school. However, one of the archaeologists at the University of Oregon had excavated a site near Lower Klamath Lake in northern California that was packed with bird and mammal bones. I ended up doing my dissertation on that material and, as part of that, spent a good deal of time in the Lower Klamath Lake area, right next to the Great Basin. That experience led me to fall in love with this part of the world. I have taken time out to work elsewhere—most notably in southwestern France—but the Great Basin is special, and has allowed me to combine my interests in mammals and past human interactions with them in an area that is spectacular and that provides excellent settings for the preservation of ancient bones and other organic material.

What drew you to the Donner party as a subject of research?
As I talk about in the book, this interest came about because of what I saw happen time and again while working in remote parts of the Desert West. When something went wrong in the field—flat tires and stuck vehicles are the best examples—it was generally the men on the field crew who rushed to fix the problem while the women stood back and watched. If the men couldn’t help, they tended to get crabby while the women reacted much more positively, providing what I refer to in the book as “psychic glue” that helped to keep everything on an even keel. Seeing this happen so many times, and knowing that it is just this kind of behavior that human biology leads us to expect, made me wonder what would happen when mixed groups of men and women got in real trouble, and whether their responses and fates could also be understood in terms of human biology. That, in turn, led me to the Donner Party and to the two other groups I discuss in the book.

What do you hope readers take away from your investigation of the survival dynamics of people in extreme situations?
To me, the prime lesson we can learn from the horrific ordeals that the members of the Donner Party and the Willie and Martin handcart companies went through is the degree to which our ability to survive these situations is in large part determined by our biology and by the social ties that are at the very heart of being human.

I would also be pleased if readers who are not already aware of the difference come to recognize that sex and gender are very different things. Sex refers to biology. Gender refers to specific kinds of behaviors that individuals learn as being appropriate to their particular biological sex. The two are distinctly different, even if many of the behaviors felt appropriate to a particular sex follow from biology. I would be pleased if these differences become clear to those readers of my book who are not already aware of them.

Your work also covers climate change and species extinction and has informed conservation decisions. How does the work of an archaeologist inform decisions regarding current-day ecological concerns?
Undisturbed archaeological sites often contain significant numbers of bones and teeth that can be retrieved by painstaking excavations. Those specimens tell us about the animals that were living there at the time they were deposited; dating them tells us when they were living there. We can put that information together with everything else we know about that area, including past climates, vegetation, and the people who lived there. That gives us an understanding of animal histories through time—for instance, how particular species of mammals have responded to climate change in the deeper past—that can be gotten in no other way.

Because of my knowledge of the past histories of a wide variety of mammals in the arid west, I have been asked to participate in decisions concerning potential mammal reintroductions for many parts of the Great Basin. Archaeological and paleontological data are now used in this way throughout much of the world.

What advice would you give to a young person trying to decide if he or she should follow a career in archaeology, paleontology, or a related field?
Follow your interests no matter what anyone else tells you. If you are interested in archaeology or paleontology (or even psychiatry), read all you can about it, contact faculty at a local college or university and talk to them about what it is like to have a career in this area, take classes in it when you get to college and, if you still find it as fascinating as you thought it would be, pursue it as a career. If it is archaeology or paleontology, you will never make as much money as you would if you had decided to became an attorney or a software designer or even, perish the thought, a university dean, but if you are good at it, you will have a career so rewarding that you will get more out of that career than money could ever buy. Certainly, that is how I see my own career. Science is not only important; it is also a lot of fun.