Why Australians Keep Getting Older 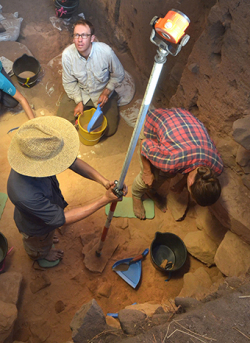 When and how the first humans made their way to Australia has been an evolving story.

While it is accepted that humans appeared in Africa some 200,000 years ago, their arrival in Australia has been less clear. Scientists in recent years have placed the approximate date of human settlement in Australia further and further back in time, as part of ongoing questions about the timing, the routes, and the means of migration out of Africa.

Ben Marwick (top) and others excavating the lowest reaches of the pit at the Australian site. Media credit: Dominic O'Brien/© Gundjeihmi Aboriginal Corporation