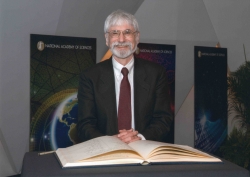 Dr. Donald K. Grayson after signing the member registry during his induction to the National Academy of Sciences in 2014. 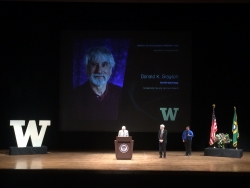 Dr. Donald K. Grayson being introduced before his faculty lecture in April, 2016. His hair was black just prior to walking on stage.

Dr. Donald K. Grayson with his wife Heidi, during his induction into the American Academy of Arts and Sciences in October, 2016.
View gallery

During the past few years, I have been fortunate enough to have been elected to the National Academy of Sciences and the American Academy of Arts and Sciences, and to have been chosen to give the annual University of Washington Faculty Lecture. All three experiences were so different that I describe them in chronological order.

I was inaugurated into the National Academy of Sciences in 2014. Held in Washington D.C., the inauguration was eye-opening, in that I realized immediately that the membership is overwhelmingly male and overwhelmingly white. I had heard that this is the case, and that the Academy is working hard to change things, but seeing it first-hand is disturbing. On the other hand, the two sections of the Academy that are my intellectual homes, Anthropology and Ecology, are distinctly different. They are more ethnically balanced and more balanced in terms of male and female membership. Anthropology, in fact, is about equally split between men and women, providing a stark contrast with such sections as Economics, Math, and Physics. The inauguration itself was daunting but was also enjoyable in some ways. We got a free lunch, we spent fun time with friends, and the guy who developed the cloaking device (think Romulans and Klingons from the original Star Trek) was inaugurated at the same time I was.

The American Academy of Arts and Sciences inauguration, held a few months ago in Cambridge, MA, was a very different experience. The American Academy membership far more closely mirrors the general American population than does the National Academy and the inauguration itself was far less formal than the National Academy version. People were extraordinarily welcoming. The actor John Lithgow, on the Board of Directors of the Academy, played a major role in the presentations and is a truly nice guy in all ways. The singer Judy Collins closed the proceedings with “Amazing Grace”, a rendition I suspect no one who was there will forget. And, I learned that the thrift stores of Cambridge are pale reflections of the thrift stores of Seattle.

The scariest experience of all was giving the UW Faculty Lecture last year. There were over 700 people there, the largest audience, I was told, to have attended such a thing; extinct North American mammoths and sabertooth cats turn out to be a big draw. That experience was scary not so much because of the size of the audience (I have talked before larger ones) but because of who was there—colleagues, friends, and a huge number of people from off-campus and lots of kids. The best thing about this experience was having been selected in the first place—sincere thanks to those who nominated me—but the second best thing was that it ended.