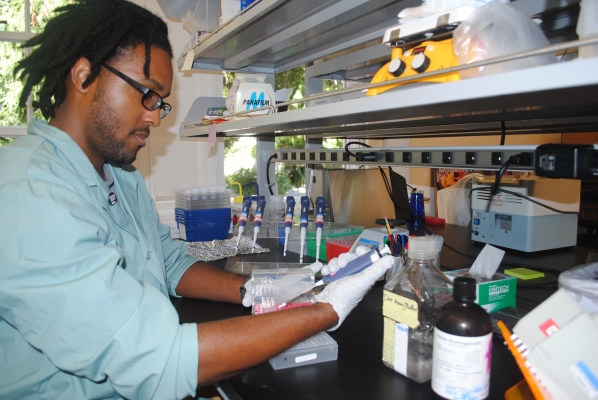 Julius Doyle at work in the lab

Congratulations are in order for biocultural anthropology graduate student Julius Doyle! Mr. Doyle was recently awarded a prestigious Ford Foundation fellowship to complete his dissertation, titled “I’m Black and I’m Strong: The Health Effects of Resilience in the Face of Discrimination among Black American Men in Metropolitan Seattle.” We have all read about, seen on TV, or felt first-hand the many ways in which African-Americans still experience distrust, fear, and outright discrimination within our society. Julius’s work begins from the idea that these acute and chronic forms of stress should have measurable impacts on our body’s physiological systems, and lead to widespread premature health problems for African-Americans. But Julius says that he is not just interested in looking at how African-Americans are passive recipients of discrimination. He is also keenly focused on the concept of resilience — the different psychological tools some people are able to use to buffer themselves against these physiological onslaughts.

Piecing together work as classic as W. E. B. Dubois’s writings and as recent as the latest developments in biomarker researcher, Julius came up with a brilliant study design, based around the fact that one of the clearest markers for long-term stress is deposits of the hormone cortisol in hair. Julius’s fieldwork, then, is based in the traditionally Black barbershops of Seattle’s Central District, the historic heart of the city’s African-American community. Here he is surveying men about a host of life experiences, from childhood to the present day, while also collecting hair samples that would otherwise be thrown away. Julius spent months building rapport within the community, helping out in a variety of ways, some commonplace and others less so — including teaching introductory Japanese for free to neighborhood kids over the summer.

Julius is conducting his field and lab work right now, supported in part by the department’s Baldwin Family scholarship. He will also be teaching Introduction to Biological Anthropology over the summer, then will spend next year as a Ford Fellow analyzing the data and writing it all up for publication and for his dissertation. Beyond that, the paths are myriad for this scholar and his vital, timely work.