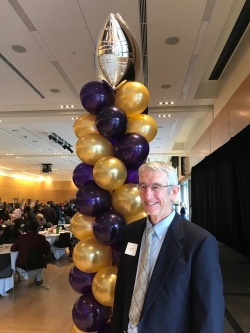 John Cady at the Staff Awards

Department of Anthropology Fiscal Specialist John Cady capped ten years in the department with a nomination for the 2017 Individual Distinguished Staff Award. The official announcement was read by UW President Ana Mari Cauce at a ceremony in late February.

Managing the finances of the department means addressing unusual circumstances every day.  Our faculty and students work around the world, and much of what we do does not fit neatly into existing categories. Our 30+ faculty and 75 graduate students pay research assistants and collaborators in dozens of currencies; book hotels and air tickets in every corner of the globe; coordinate visits from scholars from across the United States and abroad; and manage grants ranging from a few hundred dollars to millions. John oversees all of it, and still manages to make payroll and balance the department’s budget year after year.

These are impressive achievements. But the letters from faculty and staff in support of John’s nomination highlighted two out-of-the-ordinary facts that truly distinguish John and his work.  The first was specific to this year. While the move out of Denny and our temporary relocation in Condon Hall impacted everyone in the department, John’s already complex job was made even more difficult by the disruption to the normal flow and infrastructure of the department.  Throughout, as one of the supporting letters put it, John met all the budgets and all the unique demands of our fiscal lives “with his usual grace and style.” “Amid the organized chaos of the move,” another letter writer put it, “John maintained his role in our department as a humble, graceful, and dependable leader.”

Those qualities are not, of course, limited to that single year. John’s supporting letters went on to point out that his mentorship and good humor “made these usually dreaded tasks” of payroll, accounts management, and financial planning “a real pleasure.”  Fittingly for a fiscal specialist in an academic setting, John takes an educator’s approach with faculty and graduate students, helping them not only to navigate a bureaucracy but to better understand the financial infrastructure of their lives as scholars.

The official announcement of the winner of the 2017 Individual Distinguished Staff Award will be made at the June commencement ceremony. Regardless of the outcome, John’s nomination demonstrates that the Department of Anthropology has a staff that distinguishes itself every day.