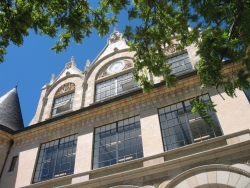 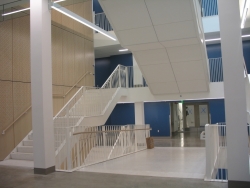 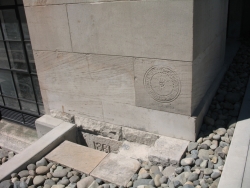 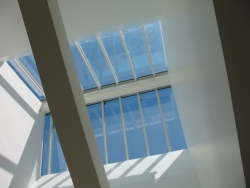 Denny Hall’s transformation comes to completion when students, staff, and faculty return to a newly remodeled and fully functioning building in fall 2016. This renovation, not without some hurdles, came in under budget and 189 days early, according to Randy Everett, project manager for UW Capital Projects Office.

“One of the goals of this project was to bring in light since it was such a dark and dismal building,” said Everett. Once a dark and foreboding, though beautiful place, the reintroduction of the skylight and central stairwell will add a feeling of lightness for building users and dwellers.

The Denny Hall cornerstone was placed in 1894 and the building completed in 1895. The University of Washington moved from its downtown location — on the corner of Fourth Avenue and University Street — to Denny Hall on the current campus where it has stood for 125 years.

Through time, Denny Hall underwent several renovations the most dramatic of which happened in 1957. “When the building was remodeled in the ‘50s there was one segment of campus that wanted it torn down,” said Everett, “so the fact that they remodeled it and butchered it on the inside might have been a blessing because at least they didn’t tear it down and they didn’t mess with the outside, that much.”

Denny Hall’s iconic French chalet architectural style, unique on the University of Washington campus, is beautiful. Once named the Administration Building, it comprised the whole university including science labs, a large auditorium, shops, offices, and housed all university functions.

As the campus grew so did the need for office space, so in the ‘50s the interior of the building was gutted. In the process they ripped out the central stairwell and covered up several windows, which allowed for the insertion of an extra floor and created as much usable office space as possible.

“As time went on it got bleaker and bleaker,” said Donald Grayson, professor of anthropology who arrived at the University of Washington in 1974. “It didn’t help that we also knew that there was asbestos in the ceiling. You could look up and see where they had marked where you shouldn’t touch because there was asbestos up there.”

“The pipes burst and flooded my office two times in the year before we moved,” said Patricia Kramer, associate professor and current chair of the Department of Anthropology. “There would be times we would knock the electricity out to part of the building, we’d blow the fuse, because we had too many computers and other equipment plugged in.”

Kramer arrived at the University of Washington in 1993 as a graduate student, so has seen the building from both a faculty and student standpoint.

“It had so much potential. It was a grand dame of a building that just deteriorated over time,” said Kramer.

Denny Hall declined to the point that renovation for safety, energy, and accessibility issues became vital. It was one of 15 buildings in the UW “Restore the Core” renovation program that focused on bringing the most historic buildings on campus up to current construction and use standards.

Pre-plans for renovation began in 2007 with funding support from the state legislature. Renovation plans for Denny Hall came screeching to a halt, however, as unforeseen economic circumstances caused once promised funds from the state to be withheld. Denny’s historic importance and prominence on campus factored into the decision to place the project on hold until funding became available.

Reinstated funding materialized five years later but was decreased by $4 million from the original proposal, requiring the team to identify the most important features to maintain from the original plan and what could be removed. A proposed second accessible entrance on the north side of the building next to the parking lot, for instance, was eliminated.

“It would have made so much sense to put an accessible entrance right next to your accessible parking,” said Everett, citing the loss of the second entrance as a major disappointment, while noting that updating the entrance would not have allowed for the costlier interior renovations.

The restoration of the central stairwell would be the largest and costliest part of the project. Everyone agreed the reintroduction of this feature was imperative, along with uncovering the pre-existing skylights, to restoring Denny Hall to its original feel and environment.

Excavation around Denny Hall revealed the 1894 cornerstone stamped with the University of Washington seal and the university motto “Lux Sit”  (which is Latin for “let there be light!”). Unexpectedly, an additional corner stone dated 1861 became visible at the foundation. Not only had the builders moved the university to Denny Hall, they brought the original cornerstone from the downtown location with them.

Denny Hall’s status as the oldest building on campus motivated and energized the team of designers, architects, and contractors. “Everybody was motivated. That’s why we were able to finish on time, ahead of time, on budget, with a building that I think everybody’s pretty happy with,” said Everett.

Despite challenges to construction from the start, the new Denny is ready and will be open for business beginning Autumn Quarter 2016. Prior residents of the four departments (Anthropology, Classics, Germanics, and Near Eastern Languages and Civilization) and one center (Language Learning Lab) housed in Denny Hall begin moving back in early September.

“The teaching lab is going to be amazing,” said Kramer “my own research lab is… I mean it has windows, and it’s light and it’s got a whole wall dedicated to computer stations for my undergraduate and grad students.” Students will be able to work without fear of blowing a fuse.

The grand dame of a building, full of historical significance, makes her entrance back to central campus. She is sporting a new central stairwell and skylight, forever connecting the past with the present.

Let there be light!