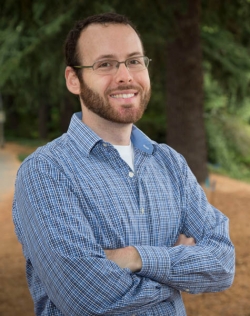 Anthropology graduate student Dan Grunspan recently made national news with his article, “Males Under-Estimate Academic Performance of Their Female Peers in Undergraduate Biology Classrooms.” Dan did not set out with the goal of demonstrating gender bias among college students. Rather, he was collecting and analyzing data on how students form study groups and how these impact their subsequent grades as part of his dissertation focusing on social learning. Proving that fieldwork can occur in the most familiar of settings, he was doing this in the large lecture Introductory Biology classes where he is a teaching assistant, in collaboration with the UW Biology Education Research Group. As part of the data, the team asked not just who students studied with, but also who they thought knew the course material well. Of course, Dan also had access to student’s performance on exams so he knew exactly how well they performed. Matching student nominations to the grade data, as well as to data they collected on how often students spoke out in class, he was able to see that students who do well on exams were indeed much more likely to be nominated as being knowledgeable. But beyond that, a startling pattern appeared: in 11 out of 11 surveys that he and his group conducted, males over-nominated other males, after controlling for actual grades and outspokenness. So much so that the average male student would rank a female with an A and a male with a B as equally knowledgeable. On the other hand, females showed no significant gender bias in any of the 11 studies.

Dan and his colleagues published their findings in the journal PLoS One, and immediately received calls from media outlets from around the country, including the Washington Post, US News and World Report, the Atlantic , the Huffington Post, and influential blogs like Jezebel, Wonkette and Vox. And the story spread from there. “Two places I never expected to see my research end up,” says Dan, “were Teen Vogue and The Onion.” The reasons for the wide-spread interest in the story are obvious. For many of us, it may not be surprising to see that bias against female performance is alive and well among males, but being able to empirically document it—to show for certain that it is due to differential evaluation and not to differential performance—is rare. While it is disappointing to see this behavior among millennials, it also provides verifiable proof that males begin to evaluate females less favorably at a young age. Given how important peer evalaution is in helping college students shape their own self-impressions and career goals, the relevance for recruitment of women into STEM fields is obvious. But it also provides powerful evidence to contribute to larger other timely policy discussions—for instance, about equal pay, demonstrating that men really do evaluate their female colleagues lower for the same performance as males. The good news is that Dan and the group he works with have creative ideas about how to interrupt this bias in the classroom, and preliminary evidence of their effectiveness. Stay tuned!

Dan’s next steps are to finish his dissertation, and then head to Arizona State University, where he will begin a postdoc with Sarah Brownell and Randall Nesse in the Center for Evolution and Medicine. Congratulations Dan!