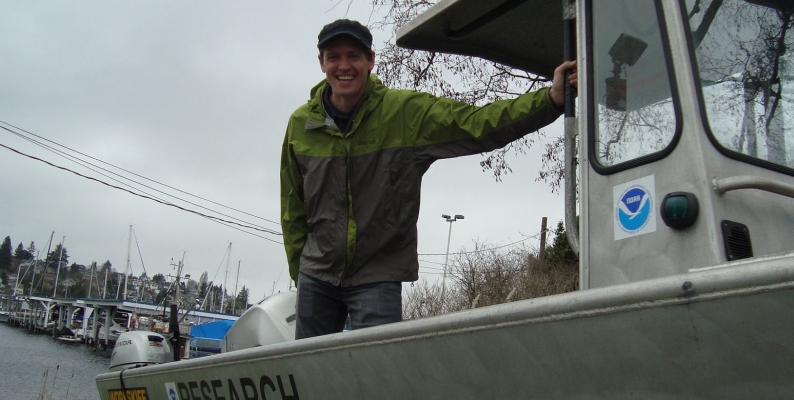 Karma Norman’s career as an anthropologist is the result of both an extended fishing expedition and a shifting tide in the management of U.S. coasts and marine life. Working as an anthropologist at the National Oceanic and Atmospheric Administration’s (NOAA) Northwest Fisheries Science Center, Karma (PhD in Environmental Anthropology, 2007) was hired as the Center’s first anthropologist, after having just returned to Seattle from a year of dissertation fieldwork in the Pacific. He quickly commenced work at the federal agency charged with managing the nation’s fisheries, without even having been home long enough to re-adjust to wearing shoes.

Karma earned his doctorate in anthropology from within the UW’s Environmental Anthropology program in 2007, and his dissertation research concerned the artisanal fishing practices of people living in the Torres Strait Island communities situated between Papua New Guinea and Australia. While conducting his fieldwork, Karma also worked as a consultant to the islands’ regional government, documenting islanders’ cultural interests in and uses of adjacent marine spaces. He produced reports for the indigenous community of Badu Island, supporting their legal assertion to marine property and use rights under Australia’s Native Title Act.

Even as Karma was beginning work with the communities of the Torres Strait to better understand cultural approaches to fishing and marine tenure systems, U.S. ocean and coastal management agencies and policy-makers were beginning to appreciate the importance of understanding fishing peoples in marine environmental management. Realizing that oceans and fishery management encompassed more than just oceanographic, ecological and marine biological research, NOAA began hiring social scientists in earnest. The unique methodological tools and perspectives offered by anthropology soon allowed for a number of environmentally-oriented anthropologists, including Karma, to be buoyed by a changing tide in fisheries management and research.

Through his work, Karma has coordinated and participated in ethnographic research among pier-based subsistence fishers in Southern California. More broadly, he is involved in national research efforts that explore ways in which the communities of the West Coast are socioeconomically dependent upon adjacent marine environments and biota. He is leading a study about ideas of social vulnerability in the context of marine policy shifts and environmental change. He is also examining shifting social networks within specialized fisheries, looking at social perceptions of ecological restoration efforts in Puget Sound, and developing methodologies for identifying and considering cultural interactions with complex marine ecosystems. In initiating and managing a variety of NOAA research efforts, Karma has built upon the mentoring and vibrant academic milieu of his former department. Indeed, the UW’s Department of Anthropology continues to provide expertise in the form of graduates that Karma has recruited for postdoctoral research positions, including alumni Sara Breslow and Melissa Poe. In this respect, the UW’s Department of Anthropology offered Karma an ideal academic environment in which to develop an extended fishing expedition of sorts—one that ultimately engenders a rewarding career.