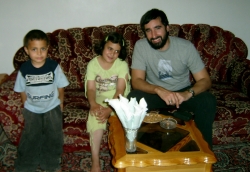 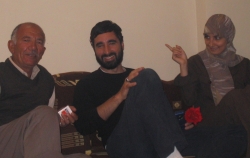 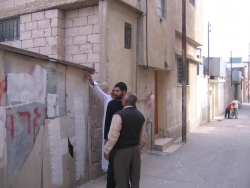 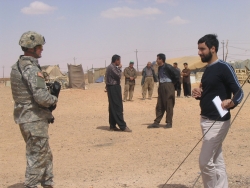 Anthropological fieldwork rarely turns out to be the linear process a graduate student usually imagines it to be. At least that is what Professor Michael Vicente Pèrez, our newest faculty member, discovered during his recent graduate training in the field of Palestine studies.

After the outbreak of the Palestinian Intifada in 2000, he saw an opportunity to apply his anthropological research skills to this dynamic and often misunderstood part of the world. He hoped that an ethnographic account of violence in Palestine/Israel could reveal a more accurate story behind the recent surge in bloodshed. Unsure of what that story might be, but knowing he wanted to understand it, he enrolled in a PhD program at Michigan State University and began preparing for research on the Middle East conflict.

In 2003, he joined the Michigan Peace Team—a local peace organization based in Lansing—for a summer effort in the West Bank meant to promote the principle of non-violence among Palestinians resisting the Israeli occupation. After two months in the West Bank, he returned to the U.S. with a new and more intimate perspective on the conflict, one grounded in the lives of ordinary Palestinians engaged in the daily struggle to create a normal life under extraordinary circumstances.

As a pre-dissertation researcher, Professor Pèrez returned to Israel/Palestine in 2004, hoping to begin the research project he had prepared for. However, seventeen hours after arriving in Tel Aviv, he was forced to leave the country for untold reasons that not only prevented his entry but also forced him to reconsider his research topic. Committed to completing a project on the Middle East conflict, he shifted his focus, twice. First, he conducted research with Palestinians in the United States. Next, he conducted research among Jordan’s Palestinian refugee population, which ultimately became the topic of his dissertation.

Lessons learned under challenging and unstable field situations can often prove to be rewarding experiences. Supported by grants from Fulbright IIE and Wenner-Gren, he conducted two very successful years of ethnographic research among Palestinian refugees throughout Jordan. His research examined how the ambiguity of Palestinians’ existence in Jordan, as both citizens and refugees, informed critical aspects of how they articulated their own sense of identity. Marginalized within the Jordanian national context and displaced from the center of Palestinian politics, Palestinians engaged in their own forms of national expression that reinforced their status as outsiders within. Despite restrictions on public displays of Palestinian nationalism, Palestinians asserted their status as a distinct ethno-national community through everyday forms of nationalism including symbolic representations of Jerusalem and pre-partition Palestine. These “nationalizing” practices not only underscored their engagement with Jordanian nationalism but also suggested their claim on homeland politics.

While in Jordan, Professor Pèrez also discovered that his anthropological interests could reach beyond the boundaries of academia and contribute to the field of public scholarship. Thus he joined the editorial staff ofIslamica Magazine in Amman as a senior editor and developed a newfound passion for popular media. While working with Islamica, he wrote about the Middle East conflict and interviewed Muslim American leaders including Louis Farrakhan and the late Warith D. Muhammad.

After returning from Jordan, Professor Pèrez taught at several universities and a community college in Michigan. He also completed a Faculty Diversity Teaching Fellowship at Montgomery County Community College in Pennsylvania. He continued his commitment to public media by joining the editorial team of The Islamic Monthly as a senior editor and contributor. In addition, he is currently working as an associate editor for Altmuslimah.com, an online publication with a focus on gender and Islam.

Professor Pèrez has developed a suite of new courses for the Department of Anthropology, all of which are being met with great enthusiasm. These include courses on Memory and Violence, Peoples and Cultures of the Islamic Middle East, Islam and Popular Culture, and Anthropological Perspectives on Ethnicity.

Although Professor Pèrez is only in his first year at the UW, he already has plans for a new research project in the future. As a Cuban-American, he is also interested in the spread of Islam into Latin America, and would like to conduct research on the intersections between Arab migration and the development of Islam in Chile. But for now, he is delighted to be in Seattle, together with his wife Fatima Bahloul, and their two little boys, Joaquin and Mazen.