Dumpsters, Forbidden Fruit, and the Social Afterlife of Things 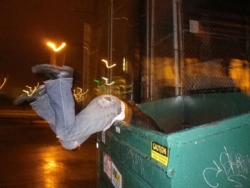 A man hanging over the side of a dumpster

On any given Sunday, the Pike Place Market is a busy place. At the peak of the summer, “busy” can mean almost sixty thousand visitors in a day. And in the space of a year, it may mean ten million, tourists and locals alike, most of them there to shop. The market is one of Seattle’s most iconic attractions, with a spectacular range of shops and stalls. Maybe most iconic are the post-card-perfect rows of fruit and vegetables. And from those rows, many of the visitors are here looking for just the right apple. Or pear. Or tomato. Or avocado. With stalls vying to attract the attention of ten million passersby, inevitably a lot of apples won’t make the cut. The dumpsters here virtually overflow with slightly bruised peaches, perfectly tender mangos, and barely wilted lettuce—part of an estimated 96 billion pounds of edible food thrown away in the U.S. every year. Food that has reached the end, not of its usefulness, but of its social life.

Fortunately for the abandoned peach, pear, or avocado, there are also often people working to intercept it before it hits the dumpster. On any given Sunday for the better part of the last five years, Dave Giles has been one of them. His doctoral research investigates the economic and cultural relationships between waste and want in cities like Seattle, through the work of groups like Seattle’s chapter of Food Not Bombs—an international network of volunteers who solicit leftover produce from vendors like those at Pike Place, prepare it, and distribute it publicly, for free, to anyone who wants it.

His project asks: what becomes of the estimated five billion pounds of useable food items discarded annually by retailers once they cease to be viable commodities? What sort of a cultural afterlife is in store for trash once it is taken off the market? One conclusion the research points to is that while most of it does find its way to the landfill, a significant amount remains useful, and is reclaimed by efforts like Food Not Bombs. Such post-commodities are put to productive cultural work in a variety of ways that never make it into the calculation of a nation’s “GDP,” but are still an important part of its cultural life. In other words, it’s not just “the economy, stupid.”

One of the most important ways they are put to work is to support those people who are homeless and hungry. Over fifty million Americans experience food insecurity annually, and many of them seek assistance from groups like Food Not Bombs, which rely on would-be waste. The research suggests that, like their discarded diet, these people, too, are often not factored into the market (in part, because they are assumed not to have been potential customers). In a sense, like edible, wasted food, these individuals are at the edge, not of their personal lives, but of social life.

Another conclusion Dave’s research points to is that very similar cultural prejudices apply to both discarded food and to the people who subsist on it. That is to say public anxieties about the safety or unsightliness of discarded food, on the one hand, and of the hungry and homeless, on the other, are closely related and are often disproportionate to the actual hazards they pose. In contrast to the widely promoted post-card imagery of places like the Pike Place Market, for example, there is considerable political pressure in Seattle to keep the activities of outdoor meal distributors like Food Not Bombs out of the public eye, lest they inspire public fear or dis-ease. The research suggests that these fears are a key component of laws restricting the public distribution of food in numerous American cities.