Of Course ... ANTH 361: Thought-provoking and Tasty 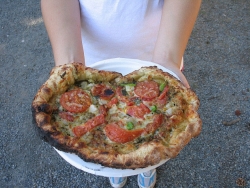 Pizza cooked by students in ANTH 361 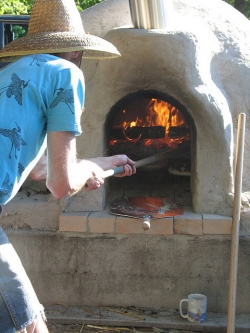 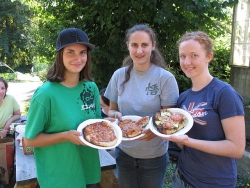 “My friends are all envious because we get to cook in class,” a student told anthropology professor Ann Anagnost in 2007, the first time she taught “Food for Thought” as an early fall start seminar for freshman. Since then, the class has been turned into an upper division course for both anthropology majors and a growing number of non- majors interested in interdisciplinary food studies.

Student interest in food issues seems to be expanding exponentially on campus. It has been fueled, in part, by the development of the UW Student Farm, an initiative begun in 2005 by a small number of students and faculty who broke ground in pockets of unused space around the greenhouses in the south part of campus. Other student initiatives followed, including a student P-Patch just to the west of Fluke Hall and the Student Food Co-op, which will begin selling sandwiches this year from a cart on Red Square, using produce from the farm whenever possible. The farm was recently granted a new space to expand at the Center for Urban Horticulture in collaboration with Seattle Youth Garden Works, a program for disadvantaged youth to learn job skills. Anthropology majors have been active players in these developments, often taking leadership positions (see the story in this issue on undergraduate research).

The core objective of ANTH 361 is to raise student awareness of how food connects issues of the body and health, with concerns for the environment and for social justice. “I realized from the start the importance of incorporating hands-on activities with food as a powerful learning tool,” says Professor Anagnost. The problem was finding a teaching space on campus that had cooking facilities. The university no longer has kitchen labs since they were all pulled out some time ago when Home Economics ceased to exist as an academic department. A query to UW Housing and Food Services opened access to the industrial kitchen hidden behind the double steel-clad doors in the Husky Den Food Court. “The students loved it! They all watch Hell’s Kitchen on television, and they adapted to the chaotic whirl of everyone slicing and dicing very quickly.” Setting up the logistics for these exercises can get to be exhausting for the instructor, but “the adrenalin rush in watching the students get to work and their taking such pride in what they produce is well worth it.”

The course has five kitchen days integrated into its curriculum. Each cooking exercise is integrally linked with course themes and readings, such as food aesthetics (the Japanese lunchbox) or food and identity (collard greens and Hoppin’ John). An underlying theme throughout is “reclaiming home cooking” as a means of remaking the agro-food system from the inside out. Many students grew up in homes where nobody cooks. And they did not learn cooking skills in high school. Preparing whole foods from scratch is presented as a “skill for life” that is also connected to an ethics of living with important connections to personal health, the environment, and social justice.

Not surprisingly, students often remark that the kitchen work is their favorite part of the class. On the final day of the quarter,they gather at the wood-fired cob oven, built of straw and local river mud by students at the UW Farm, to bake pizzas as a real-life experiment in the power of food to draw people together. They bring friends to share in the experience of a Slow Food convivium, a “living together” that reanimates the social aspects of food often lost in a fast-food culture.