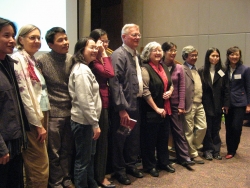 It’s not uncommon to hear a retiring faculty member say, “After I retire, I can finally get more work done.” Professor Charles Keyes, who joined the department in 1965, “retired” in 2006 to pursue an even more active schedule. In addition to returning temporarily to serve as Acting Chair of the department in 2007, Dr. Keyes has continued to teach and supervise PhD students. But today, although he still offers courses at UW, he is just as likely to teach in Ho Chi Minh City in Vietnam, or Chiang Mai in Thailand, in the countries and among the people with whom he has worked since the early 1960’s.

Dr. Keyes has long recruited promising graduate students from Vietnam and Thailand to study at the University of Washington, with at least 18 graduate students coming from Southeast Asian countries to study here. In addition, he has sat on PhD committees for Thai students in their own country and elsewhere. Dr. Keyes proudly remarked, “I’ve trained more anthropologists working on Thailand and Vietnam than anybody else, outside those countries of course.” And his commitment to training Thai and Vietnamese anthropology students continues to drive his very active retirement. In 2009, the National University of Vietnam in Ho Chi Minh City invited him to present a lecture series. He also continues to work with individual students to design and complete their research. Currently, he serves as chair of three on-going PhD committees and as a member of six committees spanning the Departments of Anthropology, Geography, History, and the School of Architecture and Urban Planning.

Dr. Keyes is also one of three advisers working with on a project that supports researchers examining “cross-border” issues that face peoples whose homes are adjacent to, or span, the borders of modern nation-states in Asia. The project, organized by the Maha Chakri Princess Sirindhorn Anthropology Center in Bangkok, involves researchers from several Asian countries who study border cultures. The program is supported entirely by Thai funds, with Dr. Keyes and two other international advisers providing guidance on developing research projects, and helping researchers with their completion. He is looking forward to returning to Bangkok next month for the last in a series of project workshops.

Closer to home, Dr. Keyes is working with UW Librarian Judith Henchy to build a digital archive of research materials on Thailand. In collaboration with two centers in Bangkok, the UW will house part of the archive, which will be accessible through a common website and searchable in both Thai and English. Initially, the archive will focus on photographic materials, and will later include field notes and other documentary materials. Dr. Keyes’s own research notes and materials will reside in the archive, and he is busily digitizing and scanning a lifetime worth of material, much of it dating from the era prior to personal computers and previously only available on paper. When completed, the archive will be of lasting value to scholars both in Thailand and the rest of the world.

Of course, a professor’s retirement would not be complete without writing and publication projects. Dr. Keyes is currently working on two books. The first is based on work he did with his wife Jane in Northwest Thailand in the late 1960s. The book will feature photographs of their work on the Thai/Burmese border, an area that is culturally and ethnically rich. During their year and a half in the area, Jane took many photographs, which will form the core of the book. Dr. Keyes described his experience in the border region, in the late 1960’s, as a “world that doesn’t exist anymore,” noting that it felt and looked much like it would have in the 19th century. Given the massive changes that have overtaken Southeast Asia in the intervening years, their upcoming visual record will allow people to experience a now-lost world. His second book will draw on long-term research in a village in northeast Thailand from the early 1960’s to the present. This study focuses on the transformation of ‘rural’ Thailand as villagers have increasingly sought non-agricultural work in central Thailand and, for dozens, abroad in Taiwan, the Gulf States, Israel, Japan, and Singapore. Yet, most still retain their identity with their natal village.

When asked whether his retirement included any plans for relaxation, Dr. Keyes noted that he had actually been to a beach since retiring, for his son’s wedding, but that he doubted it would be a regular occurrence. For now, Dr. Keyes is spending his retirement the way he spent a long and distinguished career at the University: mentoring students and making the results of his extensive research into the peoples and cultures of Southeast Asia available to the scholarly community.