Food for Thought — In Rome 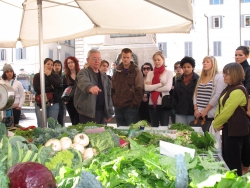 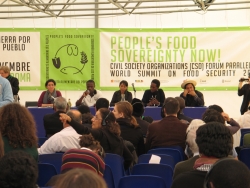 In Fall Quarter 2009, Professor Ann Anagnost took 17 undergraduate students to the University of Washington’s Rome Center for a program on “The Culture and Politics of Food in Italy” (co-taught with Lucy Jarosz in Geography). Rome’s traditional open-air markets and the presence of the United Nations Food and Agricultural Organization (FAO) headquarters made Rome an ideal site for learning about both local food systems and global food governance. Through a project-based curriculum, students learned how Rome’s green markets and artisanal food producers are adapting to growing competition from supermarkets and industrialized agriculture. New farmer’s markets and box schemes (community supported agriculture) seemed to appear almost every week, attesting to the vibrant growth of alternative food movements. Students did ethnographic studies of Rome’s marketplaces; they learned about local food culture by studying Italian food history and by producing an artisanal food of their choice (such as a pasta, a simple cheese, a bread); they used their study of Rome’s farm-to-school program to craft policy statements for improving the quality of lunch programs in the U.S. just as renewal of the Child Nutrition Act was being debated in Congress.

The class traveled to Tuscany for a week to Spannocchia, an ancient agricultural estate that is now a center for environmental learning. Students learned about the importance of landscape conservation and the preservation of biodiversity. Many of them had never visited a working farm and were excited to meet the farm’s heritage cinta senese pigs and learn about the production process from piglet to prosciutto. They discovered the complex planning it takes for farm-to-table organic gardening and the mysterious lives of bees. They were introduced to the techniques of wine and olive oil tasting in between hikes to a medieval castle hidden away in the nearby hills.

Students learned about global food governance by attending the opening ceremonies of World Food Day at the FAO where they were seated in the middle of all the action among the international delegates. They listened to debates on the causes and proposed cures for the global food crisis. They were later invited to participate as observers at the People’s Food Sovereignty Forum, an international gathering of civil society groups such as Via Campesina, as well as NGOs, farmers, farm workers, fisherfolk, pastoralists, and indigenous peoples who met to forge a declaration demanding that the political causes of global hunger be addressed. Students had the opportunity to observe Olivier de Schutter, the United Nations Special Rapporteur on the Right to Food as he gathered testimony on the large-scale land grabs occurring since the onset of the global food crisis in 2008. The forum was an impressive exercise in radical democracy as participants organized themselves into working groups to draft a document that was delivered to the FAO on the final day of the World Food Summit in November.

Since the conclusion of the program, students have been able to build on their Rome experience in exciting new directions. Laura Christie has combined forces with Fraternity Kitchen blogger Darlene Barnes to work on reforming the food in the Greek system to be more locally sourced and sustainable. Kylie Smith will be doing an internship with Dario, the Dante-spouting Tuscan butcher immortalized in Bill Buford’s book Heat. Ellen Peterson will be doing an internship for The Minnesota Project, developing web resources for their gleaning project The Fruits of the City. These examples attest to the transformative possibilities that study abroad delivers to students eager to expand their everyday horizons. The department hopes to offer this program again in Fall 2011. For more information, please go to the program website: http://foodstudiesinitaly.blogspot.com/