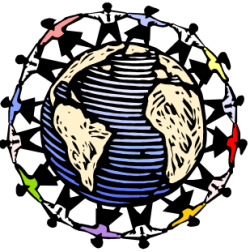 During Autumn 2019, the Current Issues in MAGH seminar series will take place on Wednesdays 3:30-4:50 in Johnson Hall 102. While this is also a class for credits, everyone is welcome to attend.

Abstract: We came up with this theme for the series, because we feel there is a deep need to uproot and reroute both anthropology and global health if they are to address their imperial and colonial past and present neo-colonial agendas and structures in real ways.  We ask ourselves and our guests, in what ways might a decolonizing framework facilitate the work of challenging the status quo, to create a society founded on equity, compassion and social and racial justice?  These guests each bring unique experiences, tools and perspectives that will help us generate a radical, critical, liberational and alter/native foundation and conversation about decolonizing anthropology and global health for the rest of the series.

October 9
James Pfeiffer, Professor of Global Health and Anthropology, University of Washington
"NGOs and the Politics of Austerity in Africa: Decolonizing Aid to Health Services"

Abstract: In many African countries hundreds of health-related NGOs are fed by a chaotic tangle of Western donor funding streams. Some critics contend that channeling funds to western NGOs rather than local public health institutions constitutes a kind of neocolonialism putting finances and decision-making around health in developing countries in the hands of Western interests. The recent debates around the UN call for “Universal Health Coverage” (UHC) highlights how foreign aid and Western NGOs undermine local autonomy to build health systems to reach UHC. Mozambique provides an illustrative case. In the 1990’s, NGOs multiplied across post-war Mozambique as the country’s IMF-imposed structural adjustment program constrained public and foreign aid expenditures on the public health system while donors favored private NGOs.  In the 2000s, HIV/AIDS and other vertical aid funding from many donors increased dramatically. In 2004, the United States introduced PEPFAR in Mozambique at nearly a half billion dollars per year, roughly equivalent to the entire Ministry of Health budget.  To be sure, PEPFAR funding has helped put thousands on anti-retroviral treatment, but over 90% of resources flow “off-budget” to American NGO “implementing partners” with little left for Mozambicans themselves to manage their own health system.  After a decade of this major donor funding to NGOs, health system coverage has barely changed.  In 2014 the workforce per population ratio was still among the five worst in the world at 71/10000; the health facility/per capita ratio worsened since 2009 to only 1 per 16,795. “Decolonization” of health care will require rejection of austerity constraints on public sector health systems, and rechanneling of aid to public systems building rather than NGOs so that Mozambicans are in charge of their health futures.

October 16 *CANCELLED*
Leah Isquith, Remitly
“Do No Harm and Try to do Some Good: Searching for Balance in Community-Based Research”

Abstract: Female genital mutilation/cutting (FGM/C) is a practice that involves the complete or partial removal of the external female genitalia for non-therapeutic reasons.  These practices have been documented in countries throughout Africa, Asia and the Middle East, as well as across the diaspora.  FGM/C is associated with elevated risk of health complications, and is a violation of the rights of girls and women.  Beginning in the 1970’s, the international community, national and local institutions, and the governments of numerous countries have taken a stance against FGM/C, and backed numerous programs aimed at eliminating the practice through a wide variety of approaches.   To date, progress toward these goals has been considered slow and uneven.  This has sparked calls to inform interventions by theories on behavior change, and produce new evidence-based research that can provide insights on how to accelerate abandonment of FGM/C.  The vast majority of scholarship has been conducted in the global north, with limited input and collaboration with specialists in Africa, where the practice is most highly concentrated.  In an effort to advance the contributions and leadership from African scholars, and optimize intervention efforts in their own countries, a donor-funded and African-led research consortium was formed to conduct research in six African countries.  Bettina Shell-Duncan partnered in this consortium as one of two non-African research advisors, and Sarah Smith worked for two years at a partnering organization in Senegal.  In this talk, they will describe the goals of this consortium, their own roles and contributions, as well as observations of the collaborative research process.  We will reflect on the many successes of this project, but also the complexities of working toward “decolonization.”

October 30
Rachel Chapman, Associate Professor of Anthropology, University of Washington
“Austerity, Precarious Use and the Elusive AIDS-Free Generation in Mozambique”

Abstract: Making a theatrical documentary from interviews about conflict surrounding salmon habitat restoration and farmland preservation in the Skagit Valley of Washington State was originally conceived as a way to present my ethnographic results in a transformative medium for my research subjects.  I hoped that the play would inspire bitterly opposed farmers, Native Americans, and environmentalists to see each other in a new light and recognize their potential to collectively address common challenges.  Instead, making the play became an unexpected way to critically reflect on anthropological research and cross-disciplinary collaboration, as well as issues inherent in the Skagit conflict itself.  Creating a drama-worthy script forced me to hone in on the most compelling interview passages and to constantly strive for a narrative arc.  These spare requirements of theater exposed the paradox of academic research.  Its hallmarks of theorization, accuracy, and caveats can weaken the emotional power of an argument and its potential to influence change.  Yet at the same time, the appeal of telling a good story can overwhelm the critical, subtle analysis that is necessary to make sense of complex and incongruous phenomena.  My decision to collaborate with a professional theatre artist further exposed norms of anthropology and academia that I took for granted, such as ethical responsibility to research subjects and basic definitions of research and authorship.  But it was our need for a narrator that transformed the collaboration into a drama of its own:  we agreed the narrator should be the anthropologist – or, me.  I was then confronted with the strange and painful process of being represented as a character in the play – and with the possibility that mis-representations of me might be viewed by audiences that included colleagues, research subjects and potential employers.  While I ultimately regained control of how I was represented, the experience exposed the uncomfortable reality that most anthropologists’ research subjects are not able to exercise such authorial oversight.  In these ways the process of making the play transformed by attempt at research-based theatre into a method of critical reflective theatre-based research.  It enabled me to write a more deeply informed ethnography about the multi-vocal Skagit conflict, with new personal insight into the nature of conflict and collaboration, the desire to tell one’s own story, and the fraught practice of anthropological representation.

Abstract: Following international recommendations, in 2016, Mozambique started a national program to meet the ambitious HIV treatment targets that should lead to ‘ending AIDS’ by 2030. Yet, Mozambique’s approach was staggered and cautious, suggesting reservations about meeting those international targets. These reservations were consistent with the slow improvements in the control of the epidemic and with chronic data quality issues, despite nearly two decades of international investment in the national response to HIV and AIDS. I look at the inability of the health information system in providing reliable data on viral suppression at a public health facility where I conducted ethnographic research in Maputo, Mozambique, between February 2016 and July 2017. This inability raises questions about the reasonableness of the global HIV response project expecting to meet ambitious targets, within a short period, where, decades of presence have not translated into public health systems capacity to play its role, including providing reliable information about the epidemic.